i am working on a wallet that is using BIP32 for creating Accounts, addresses, xpub, public keys, transaction and etc. but now i want to switch from BIP32 to BIP 44. how can i do this using bitcoinj i also study this, but there is nothing related to implementation. All i need to know that how can i implement BIP44 using bitcoinj and what is specific changes i have to do.Do i have to change all the hierarchy, if yes, then how can do this

I’ve searched on the internet and still unable to understand the usage of cold storage. Actually, I want to buy a few types of low price crypto currency coins and save them in my personal devices or papers. Later I need to send them to some exchanges to sell at higher price. I don’t want to rely on online sites/firm meanwhile before exchange. Neither I want to download blockchains of each currency.

So, how can I efficiently save my coins in my personal captivity? If I use offline wallet generator, how In-ward and Out-ward transactions will be carried out?

The question is if anyone (besides Alice, Bob and Carol who have the redeem script) can tell by looking at the address (script hash) that its final condition is ANYONECANSPEND, and miners for example choose not to include it in a block until the last nLockTime passes and the miner can claim the entire output, not just the fee.

Based on my current understanding, just by looking at a native P2WSH address (hash of script) it tells you nothing about the redeem script, or am I wrong?

Also, can miners learn the final condition if the output is spent at its second nLockTime, like when Bob and Carol try to spend, they must also provide the redeem script, thus allowing miners to see that if they wait 500 more blocks they can claim the entire output, not just the fee, and not include it in a block until then. Thank you.

Is this correct? I find it hard to believe that so many people would buy into a system that’s so inefficient / unscalable.

Also, if my assumption is correct, suppose there are (on avg) 700 transactions per second during a given 10 min period (i.e, 70 times the max output rate) does this mean we will need to wait 70 * 10 min for all those transactions to be confirmed? If yes, why can’t some evil actor overwhelm (i.e, postpone) the system by submitting thousands of tiny transactions to the network?

I noticed on the new update of the Bitcoin Cash wallet (BitcoinABC) (for testnet and not sure for mainnet) that it has a weird beginning and address (e.g. bchtest:qrz89sz3r47ndj60xq68xeus0hx9qwlpkuw5pw01de). Is there any way to convert it back to the old format as there are some places that don’t support this format yet (like one of the BCH testnet faucets)?

I have a private key of a bitcoin wallet . Is there is any way i can check balance and make transaction using bitcoin core without importing private key. 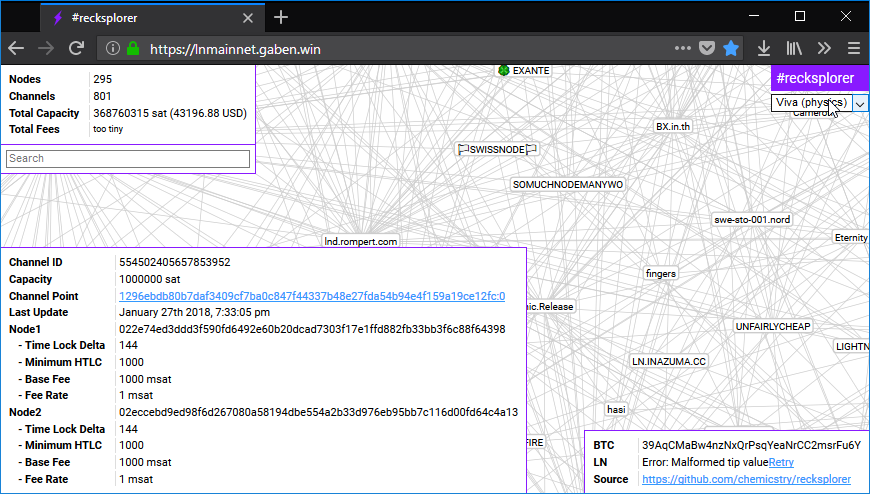 And subsequently I found it mentioned here:

Obviously, I am curious… I thought satoshi is the smallest unit?

How do I compile this source or get vanitygen for linux?

Given a replace-by-fee (RBF) transaction and a non-RBF transaction with equal fees, do miners prefer the RBF transaction over the non-RBF one? Or is this entirely up to the particular miner?

The LND API documentation is here, but doesn’t contain much information about what the responses to various calls mean. Can anyone explain what these responses are describing?

I understand this to be channel data, but not sure exactly what it’s describing.