Last time I used my Bitcoin-qt client was a few months ago. I made a backup of the wallet to an external USB drive.

Yesterday, I started the client and after it synchronized the block-chain, I saw that I had 0 bitcoins! I restored the backup wallet.dat file and started it again, it said it was rescanning, and then the same result: 0 bitcoins! Even the transaction history is blank!

I had once done a paper backup but cannot find that now. Would that help?

Is there a way to know if I was hacked and my btc stolen?

Help… any advice and hints appreciated!

I would like to know what bitcoin enthusiasts and experts would suggest me for earning or mining my first BTC. I own some BTC but the idea of mining is a lot more exciting.

I read some articles but it seems to me that I have already missed the big “boom” of mining year or two ago, when you could mine with GPU or even CPU. Some people say, that investing into ASIC miner is a non-sense because it takes a long time to deliver and during this time the difficulty of network increases and when the ASIC miner finally arrives, you are satisfied when you don’t loose money at the end.

So my question is how do you mine? What is the best way to earn few bitcoins and don’t loose money?

This is quiet exciting article that I read months ago, which turned out in great ROI.

EDIT: I would like to know, if it is good time to start mining for someone who haven’t done that yet.

So I am trying to install cgminer on my debian server. I’ve downloaded the latest nVidia drivers, tried many things but still can’t get this work.
So this is the end of the log from autogen.sh:

I’ve already tried to download the latest CUDA toolkit, but it didn’t work either. On google I just found solutions for ATI/AMD cards. (btw. I have GeForce GT-9600)

What is the minimum age a person must be to use the Bitcoin service?

I couldn’t find enough questions that ask this head-on1, so consider that if:

Will the energy cost and deflationary nature of Bitcoins doom the currency to obscurity?

Off-blockchain solutions are acceptable answers, but will require centralising a large portion of the Bitcoin network. Or put another way: Trust moves back to centralised banking facilities.

So my guess is these two problems will doom a decentralised Bitcoin, but I open the question to the floor. 🙂

The green line in this chart reflects the power per dollar in the
global economy; of which a tiny fraction is consumed by maintaining
the banking network. 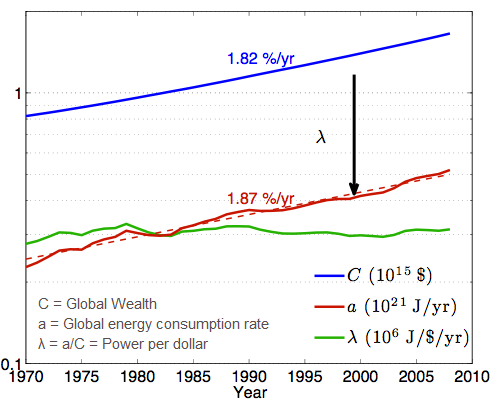 As the distributed Bitcoin cryptocurrency doesn’t use laws or other
centralised off-blockchain enforcements to protect the transaction
ledger, the energy cost per transaction can not be a fixed constant
like normal currencies. It must be a percentage of global energy
consumption2 to discourage state actors with a bevy of
power stations from subverting the global Bitcoin economy.

A deflationary currency is bad

Long story short, a deflationary currency requires a post-growth
social model; which while probably a good thing, we don’t actually
have right now.

In a classic “growth” economy, you must expand the money supply to
reflect the size and velocity of economic activity in society. If you
do not and the level of economic activity ever contracts (and there
are variety of regular reasons this may occur such as a natural
disaster or demographic bulge), then you can enter a deflationary
death spiral as each contraction contaminates other economic activities
that assumed an ROI in the form of interest that is now worth less or
worthless4.

A digital specie-based currency is deflationary in that it restricts
the money supply.

Inflation and hyperinflation are problems, but
problems of unchecked greed, speculation and social inequality that
don’t disappear by sweeping the economy under a deflationary rug.

1. Although “Will deflation destroy Bitcoin?” and “How much energy will the Bitcoin network eventually consume?” come pretty close, I really want a question that collates and settles this for newcomers, without undue eager puppy optimism from early adopters. 🙂
2. Production actually, but sane organisms consume energy they produce instead of throwing it away; so global consumption and production can be considered linearly proportional, though not 1:1 due to transmission inefficiencies.
3. To put this in perspective, you could provide everyone on Earth with universal education, healthcare, social security as an O(N) energy cost.
4. Don’t get me started on economists of the Austrian-school. They might as well be sock puppets for the entitled mega-rich for all the benefit their pseudo-science has on ordinary human beings.

I’m wondering if I can manage my bitcoins with my other securities? Or incorporate them into a business plan.

My father just asked me: What happens if the bitcoin people decide to shut down the website, what happens to my bitcoins? I didn’t know.

Surprised this one hasn’t been asked yet.

But how / what is the recommended best practice for shutting down bitcoind ?

The documentation for Ripple says that the genesis ledger starts at 0 but the “effective genesis ledger” is at 32570, because some historical ledgers are “unavailable.”

Why is this, and what does it mean for the average Ripple user?